Last summer, the Arecibo Observatory was badly damaged when an auxiliary cable carrying the platform above the telescope broke and hit the reflector shell. Immediately thereafter, technicians from the observatory and the University of Central Florida (UCF) began work to stabilize the structure and assess the damage. Unfortunately, about two weeks ago (on November 6th) a second cable broke and caused even more damage.

After a thorough review, the U.S. National Science Foundation (NSF) announced that the observatory cannot be stabilized without endangering the lives of construction workers and staff at the facility. For this reason, after 57 years of loyal service and countless contributions in various fields of astronomy, the NSF has decided to begin plans to shut down the Arecibo Observatory.

This decision was made shortly after NSF evaluated the reviews of a number of independent experts and companies to determine the cause of the structural deficiencies and recommend steps to take to carry out repairs. These evaluations indicated that the support cables could no longer carry the loads they needed and that the telescopic structure was at risk of catastrophic failure.

In addition, several reviews found that any attempt to make repairs could endanger the lives of workers. They also found that even with successful repairs, the structure would suffer from long-term stability problems. As Director Sethuraman Panchanathan said in an NSF statement:

“NSF is prioritizing the safety of workers, Arecibo Observatory staff and visitors, which makes this decision necessary, albeit unfortunate. For nearly six decades, the Arecibo Observatory has served as a beacon for groundbreaking science and what a partnership with a community can look like. While this is a profound change, we will be looking for ways to support the scientific community and maintain this close relationship with the people of Puerto Rico. "

After the first incident, the engineering teams wasted no time creating an emergency stabilization plan for the auxiliary cable system. Despite the damage the broken auxiliary cable caused to the Gregorian dome, the support structure, and the 30-meter cut in the reflector shell, engineers were ready to begin repairs by November 9 (three days after the second cable tore) ).

The observatory even arranged for two replacement auxiliary cables (and two temporary ones) to be delivered when the second fault occurred. This time it was a main cable that broke, indicating that the structural problems extended to all of the cable networks connecting the main shell to the instrument platform above. According to Ralph Gaume, director of NSF's Department of Astronomical Sciences, this was the determining factor in the decision to decommission:

“The leadership of the Arecibo Observatory and the UCF have mastered this situation commendably, acted quickly and pursued all possible options to rescue this incredible instrument. Until these assessments came in, our question was not whether the observatory should be repaired, but how. In the end, however, an excess of data showed that we just couldn't do this safely. And that is a line we cannot cross. "

Technical evaluations quickly followed, showing that this 3-inch trunk cable was stressed to about 60% of its minimum tolerance (in calm weather) when it broke. Inspections of the other cables revealed new wire breaks on some of the other main cables and evidence of significant slippage on several of the sockets to which the remaining auxiliary cables were attached.

These results confirmed that both the main and auxiliary cables were weakened more than originally projected. This led the engineering teams to conclude that shutdown and demolition were the only option. John Abruzzo was the manager of the evaluation by Thornton Thomasetti, one of the engineering firms that evaluated the observatory. As he summarized in their recommendation for a letter of action:

“While we are saddened to make this recommendation, we believe that the structure should be demolished as soon as possible in a controlled manner. It is therefore our recommendation to plan the decommissioning of the observatory quickly and to carry out a controlled demolition of the telescope. " The NSF's plan to shut down the observatory is to shut down the 1,000-foot telescope while preserving the other parts of the observatory that could be damaged or destroyed in the event of a catastrophic failure. In short, they hope to preserve as much of the remaining infrastructure as possible so that it can continue to be of use for future research and educational purposes.

The decommissioning process is complex and requires that NSF, UCF and all participating institutions meet a range of legal, environmental, safety and cultural requirements. Meanwhile, the NSF has started a high-resolution photographic investigation using aerial drones and is considering performing a forensic assessment of the cable break (provided it can be safely done).

When all the necessary preparations have been completed, the telescope is subjected to a controlled dismantling. Once this is done, the NSF intends to restore the Arecibo LIDAR facility, visitor center and meteorological facility outside of Culebra. Analysis and cataloging of the archive data collected by the telescope will also continue.

The Arecibo shutdown is certainly a sad development, but clearly necessary at this point. Michael Wiltberger, Head of NSF's Geospace Department, said:

“The Arecibo Observatory has helped transform our understanding of the ionosphere throughout its life, showing us how density, composition and other factors work together to shape this critical region where Earth's atmosphere meets space.

"While I am disappointed with the loss of investigative skills, I believe this process is a necessary step in maintaining the ability of the research community to take advantage of the Arecibo Observatory's other assets and, hopefully, ensure that important work can continue at the facility." 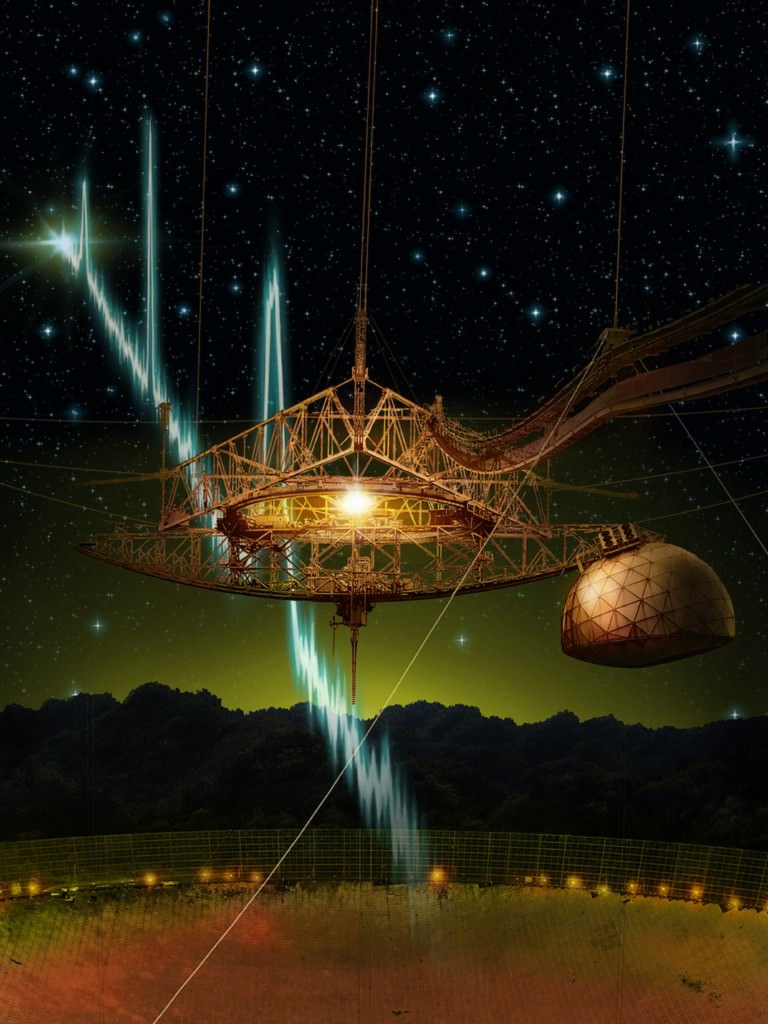 Artist's impression of the Arecibo Message, the encoded message for extraterrestrials sent by the Arecibo Observatory in 1974. Credit & Copyright: Danielle Futselaar

During its 57 years of operation, the Arecibo Observatory was the world's leading radio telescope and one of the most famous astronomical facilities in the world. Until the completion of the spherical telescope with five hundred meter aperture (FAST) in China, it was also the largest radio observatory in the world. The performance is unparalleled and includes a number of premieres.

This includes the confirmation of neutron stars, the acquisition of the first binary pulsar, the pulsar of the first millisecond and the first exoplanets. The facility is also home to the Planetary Radar Project, which (with the support of NASA's program for observing near-earth objects) tracks and characterizes near-earth objects (NEOs). In addition, the facility has played an important role in the search for extraterrestrial intelligence (SETI).

Apart from providing the source data for (Email protected) and the SETI institute's Pheonix project, the observatory, is also one of the few installations in the world that actively sends an encrypted message to the space intended for aliens. – aka. the Arecibo message. She has done so much in her life and she will continue to do so in retirement.

Until then, Arecibo! We will miss you!