Facebook is introducing a suite of new features for Facebook Groups, the private social networking product now used by over 1.8 billion people every month. At the company’s digitally hosted Facebook Communities Summit today, Facebook detailed a set of upcoming tools aimed at those who run Groups, designed help them better organize, filter and manage their communities. It also showed off forthcoming features focused on sparking discussions and announced the test of a new feature that will highlight public group discussions to non-group members, including through web searches.

The announcement comes at a time when Facebook Groups are making headlines for their growing use by those looking to spread harmful content and misinformation. Facebook this week said it removed over 6,500 militia groups and pages just last month alone, for example. Facebook Groups have also become the breeding grounds for a wide range of dangerous content, including health misinformation, anti-science movements, and baseless conspiracy theories that brainwash users into thinking there are secret signals hidden on the internet offering insight into an alternate reality that only they can see.

The updates to the Facebook Groups product, announced today, aren’t necessarily focused solving these sorts of issues, however. Instead, they’re largely about making Groups easier to manage and use, in a more general sense.

This could be used to filter out certain inappropriate content, like foul language, but it could also be used to stop the approval of posts that were off-topic, those used words or hashtags associated with dangerous movements, like QAnon, or even just those posts that were attempting to advertise by way of Facebook Groups. For example, many communities have policies banning posts from multi-level marketing firms (MLMs) — like Amway, Herbalife, Young Living, doTERRA, Avon and others– but without switching on post approval for all posts or users, there was no other way to block these attempted ads in an automated way before now. 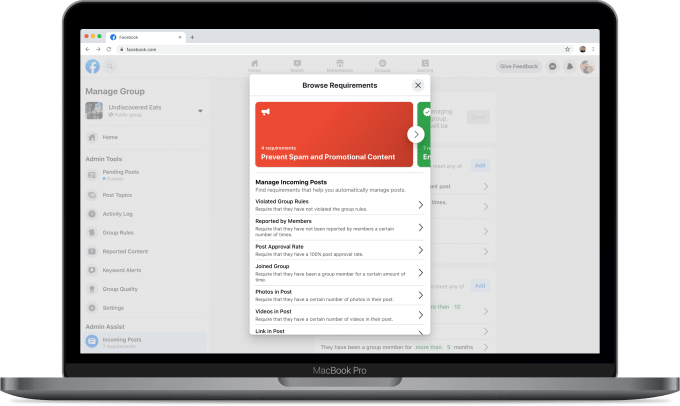 Group admins will also be able to organize content from their community by hashtag, then pin a topic to the top of the Group to highlight it for everyone. This could be helpful for tracking popular topics that get regularly discussed on the group, perhaps. It could also be used to save people from asking the same questions over and over by pointing them to places where the answers were already provided, among other things.

Facebook Group admins will also be able to use the Brand Collabs Manager which will allow them to monetize a larger, public groups by working directly with brands who want to promote their products and services to the group’s users. Before today, brands tended to collaborate with influential individuals who had a following, but now they could associate themselves with an influential group instead.

Finally, Facebook will introduce a curriculum and exam that will allow people to achieve a certification in Community Management that indicates they understand how to build, grow and support a Facebook Group community.

Other changes arriving in Groups are aimed at better engaging users.

One new feature will allow Groups to feature real-time chats for conversations with other Group users.

A new collaborative post type, “Prompts,” will encourage also conversations through the use of photos. This capitalizes on a trend already taking place across groups, where an admin will prompt discussion by asking users to share a photo — for instance, a favorite meme, a picture of their pet, a selfie, their last photo in their Camera Roll, and so on. But the new format will turn this activity into a product, allowing users to more easily contribute their response, then flip through the images shared by others.

Similarly, admins will be able to encourage discussions through new Q&A sessions which are easier for community members to participate in by not relying on the traditional threaded comment format.

Group members can also choose to customize their profile photo for each group they participate in. This could help users feel more comfortable when contributing to a larger, public community, for example, or it could be just used for fun — like using a photo of your dog in a pet community or your favorite book in your online book club, for example.

Related to these changes, Facebook also says it will begin to test new ways for people to discover conversations happening on Public groups.

This will be done by showing something called “Related Discussions” within the News Feed when someone posts a link or reshares a post on Facebook. These discussions will allow users to see what other, Public groups are saying about the same content. In a more radical change, Facebook says these discussions will also be indexed by search engines as users may see these conversations appear when “you’re searching the web.”

Facebook says that it may use this feature to open up users to more “diverse perspectives on the topics they’re into” from others with “different backgrounds and experiences.” That seems to imply the change is an attempt to de-isolate users from the Facebook bubbles they’ve built for themselves. However, it’s unclear how far Facebook will go on this front, as the feature is not yet live. It’s also not clear how users will react to be shown to opposing content — like if posts about the “big team” also included related discussions from the other team’s fan group. And if the feature was leveraged for more controversial discussions, like politics, it could get even worse.

What’s more, Facebook will invite users to join in the conversation at hand, if the Group allows outside participation.

Facebook says the feature will be tested in the U.S. in the “coming months” and admins will be offered the option to allow their groups to be included in the new Public groups experience at that time, where they’ll be able to turn on post-approvals. The feature will expand outside the U.S. next year.

The other features announced today will also begin rolling out in the months ahead.

Day by day Crunch: Uber and Lyft defeated once more in courtroom

Microsoft Says App Shops Ought to Be Extra Aggressive