Current scientific reasoning suggests that the galaxies grew slowly in the early days of the universe and took billions of years to become what they are now. However, new observations indicate that this may not be the case.

The new observations come from a survey called ALPINE (the ALMA Large Program to Study C + in Early Times). ALPINE is a program that investigates the gas and dust properties of young galaxies during the early growth phase at redshifts of z = 4-6.

"To our surprise, many of them were much more mature than we expected."

The survey found that many galaxies experienced a growth spurt between 1 and 1.5 billion years after the Big Bang. During this growth spurt, galaxies took up a significant portion of their stellar mass and dust. They also evolved into the spiral galaxies we see today and acquired heavy elements.

In the ALPINE survey, an international team of astronomers examined 118 of these early galaxies that were experiencing growth spurts.

Andreas Faisst is one of the researchers involved in ALPINE. Faisst is a researcher at the Infrared Processing and Analysis Center (IPAC) of the California Institute of Technology (Caltech) and is also the principal investigator for ALPINE in the United States. In a press release he said: "To our surprise, many of them were much more mature than we expected."

Daniel Schaerer from the University of Geneva is another ALPINE scientist. "We understood from previous studies that such young galaxies are low in dust," said Schaerer. "We find, however, that around 20 percent of the galaxies that assembled in this early epoch are already very dusty and a significant amount of the ultraviolet light from newborn stars is already hidden by this dust," he added. These are two of the galaxies in the early Universe that ALMA observed in radio waves. The galaxies are considered "more mature" than "original" because they contain large amounts of dust (yellow). ALMA also revealed the gas (red) used to measure covert star formation and movement in the galaxies.
Photo credit: B. Saxton NRAO / AUI / NSF, ALMA (ESO / NAOJ / NRAO), ALPINE team.

Another question about the early galaxies is when they established a rotation and how quickly it affected their structure. Spiral galaxies like our own Milky Way rotate, and that creates the spiral structure. Many of the galaxies studied showed signs of rotationally assisted disks and different structures.

This is contrary to expectations.

According to accepted considerations, the early galaxies should be more chaotic and chaotic. Frequent galactic collisions and fusions should have prevented so much structure from developing in such a young Universal Age. "We see many galaxies colliding, but we also see some of them rotating in an orderly manner with no evidence of collision," said John Silverman of the Kavli Institute for the Physics and Mathematics of the Universe in Japan.

Artistic animation of a galaxy in the early universe that is very dusty and showing the first signs of a rotating disk. In this picture the red color stands for gas and blue / brown for dust, as seen in radio waves with ALMA. Many other galaxies are visible in the background, based on optical data from VLT and Subaru.
Photo credit: B. Saxton NRAO / AUI / NSF, ESO, NASA / STScI; NAOJ / Subaru

Astronomers have already observed distant galaxies from this period, such as MAMBO-9 and the Wolfe Disk. MAMBO-9 is very dusty and the Wolfe disk has a rotating disk. These were indications that galaxies might ripen faster than expected. But they could have been outliers, and it took a bigger survey like ALPINE to give researchers a clearer picture. Artistic impression of the Wolfe Disk, a massive rotating disk galaxy in the early, dusty universe. The galaxy was originally discovered when ALMA was studying light from a quasar further away (top left). Photo credit: NRAO / AUI / NSF, S. Dagnello

Although ALPINE has identified a handful of these early bloomers, astronomers still don't know how they grew up so quickly and why some of them have rotating discs at such a young age.

“With ALMA we discovered some distant galaxies for the first time. We call these Hubble dark because they couldn't be seen even with the Hubble telescope, ”said Lin Yan of Caltech. 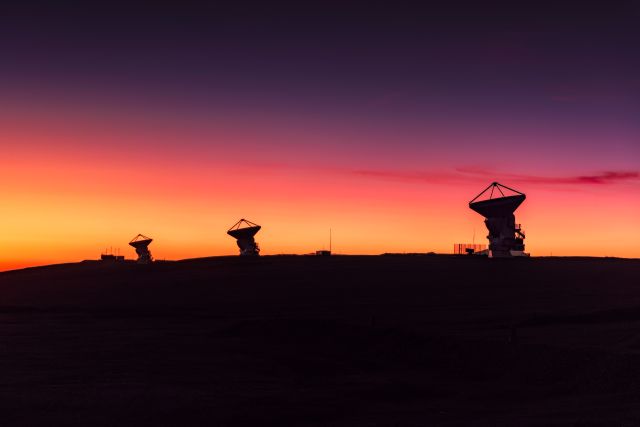 The team intends to continue to harness the power of ALMA to understand why these young galaxies are so mature. While ALPINE was a survey that used 70 hours of observation time, they want to use ALMA to observe individual galaxies over extended periods of time. “We want to see exactly where the dust is and how the gas is moving. We also want to compare the dusty galaxies at the same distance with others and find out if their surroundings could be anything special, ”added Paolo Cassata from the University of Padua in Italy, who previously worked at the Universidad de Valparaíso in Chile.

Of course, ALMA cannot do this work on its own. ALPINE is the largest study of its kind, using multiple telescopes at different wavelengths to study galaxies in the early Universe. A whole fleet of optical riflescopes were used, including Hubble, Keck, and VLT. The infrared functions of Spitzer were also used. It is impossible to understand the history of distant galaxies without observations across multiple wavelengths.

"Such a large and complex survey is only possible thanks to the collaboration of several institutes around the world," said Matthieu Béthermin from the Laboratoire d & # 39; Astrophysique de Marseille in France.

A Supernova Exploded Dangerously Near Earth 2.5 Million Years In the past