For decades, astronomers have speculated that there may be water on the Moon. In recent years, this speculation was confirmed one orbiting satellite after another detected water ice around the Moon’s southern polar region. Within this part of the lunar surface, known as the South-Pole Aitken Basin, water ice is able to persist because of the many permanently-shadowed craters that are located there.

But until now, scientists were operating under the assumption that lunar water was only to be found in permanently shadowed craters. But thanks to NASA’s Stratospheric Observatory for Infrared Astronomy (SOFIA), water has been observed on the sunlit side of the Moon for the first time. This discovery indicates that water may be distributed all across the lunar surface, and not limited to the dark corners.

The study that describes their findings recently appeared in the journal Nature Astronomy. The study was led by Casey Honniball, a NASA postdoctoral fellow at the University of Hawaii’s Institute of Geophysics and Planetology, and included members from the Space Science Institute (SSI), the Georgia Institute of Technology, the Johns Hopkins University Applied Physics Laboratory (JHUAPL), and NASA’s Goddard Space Flight Center.

SOFIA is essentially a modified Boeing 747SP aircraft equipped with a 2.7-meter (106-inch) infrared telescope. With a service ceiling of 11,600 to 13,700 meters (38,000 to 45,000 feet), SOFIA is able to fly above 99% of Earth’s infrared-blocking atmosphere and search for otherwise faint objects using its Faint Object infraRed CAmera for the SOFIA Telescope (FORCAST).

When Dr. Honnibal and her colleagues observed the Moon with SOFIA, what they noticed was the presence of water molecules (H2O) in the second-largest crater visible from Earth. This is known as Clavius Crater, which is located in the Moon’s southern hemisphere and measures 231 km (143.5 mi) in diameter and 3.5 km (2 mi) in depth.

As Paul Hertz, director of the Astrophysics Division in NASA’s Science Mission Directorate (SMD), said in a recent NASA statement:

“We had indications that H2O – the familiar water we know – might be present on the sunlit side of the Moon. Now we know it is there. This discovery challenges our understanding of the lunar surface and raises intriguing questions about resources relevant for deep space exploration.”

While previous observations had detected traces of hydrogen in this crater but were unable to determine if it was because of water or hydroxyl (OH). This chemical forms when molecular oxygen in lunar regolith bonds with hydrogen atoms, which are the result of charged particles (protons) emanating from the Sun (solar wind) picking up electrons as they travel through space.

Using the FORCAST telescope, Honnibal and her team were able to make that determination since the hydrogen they detected was had a specific wavelength that is unique to water molecules (6.1 microns). As Honnibal explained:

“Prior to the SOFIA observations, we knew there was some kind of hydration. But we didn’t know how much, if any, was actually water molecules – like we drink every day – or something more like drain cleaner… Without a thick atmosphere, water on the sunlit lunar surface should just be lost to space. Yet somehow we’re seeing it. Something is generating the water, and something must be trapping it there.”

The data obtained by SOFIA revealed water concentrations of 100 to 412 parts per million (ppm) in a single cubic meter of soil spread across the lunar surface. This is the equivalent of about a 350 ml (12 oz) bottle and is about 100 times less water than the Sahara desert possesses. Despite this scant amount of water, the discovery is very significant since it raises new questions about the origins of lunar water and how it is able to persist.

In addition, this find has implications for lunar exploration, particularly where long-duration missions and lunar habitats are concerned. As part of Project Artemis, NASA is looking to establish a program of “sustainable lunar exploration” that will include a base around the southern polar region. The presence of water ice will not only ensure a supply of drinking water but could also be used to manufacture propellants.

“Water is a valuable resource, for both scientific purposes and for use by our explorers,” said Jacob Bleacher, chief exploration scientist for NASA’s Human Exploration and Operations Mission Directorate. “If we can use the resources at the Moon, then we can carry less water and more equipment to help enable new scientific discoveries.” This find is also significant because of the way it represents the culmination of decades of research. When the Apollo astronauts first landed on the Moon, the Moon was believed to be completely dry. Interestingly, it was the rocks these missions returned that provided the first indications of lunar water, though these were dismissed as the result of contamination at the time.

Another interesting takeaway from this latest find is the fact that it’s not the kind of research the SOFIA mission usually performs. Ordinarily, SOFIA’s high-altitude observations are guided by a camera that tracks stars, which allows the controllers to keep the telescope locked steadily on its target. These include objects that are faint (like red dwarfs and black holes) or distant objects, like star clusters and galaxies.

The Moon, which is neither faint nor distant, would typically fill the guide camera’s entire field of view. After conducting a test observation in August of 2018, NASA scientists were convinced it was worth a try. Said Naseem Rangwala, SOFIA’s project scientist at NASA’s Ames Research Center:

“It was, in fact, the first time SOFIA has looked at the Moon, and we weren’t even completely sure if we would get reliable data, but questions about the Moon’s water compelled us to try. It’s incredible that this discovery came out of what was essentially a test, and now that we know we can do this, we’re planning more flights to do more observations.” 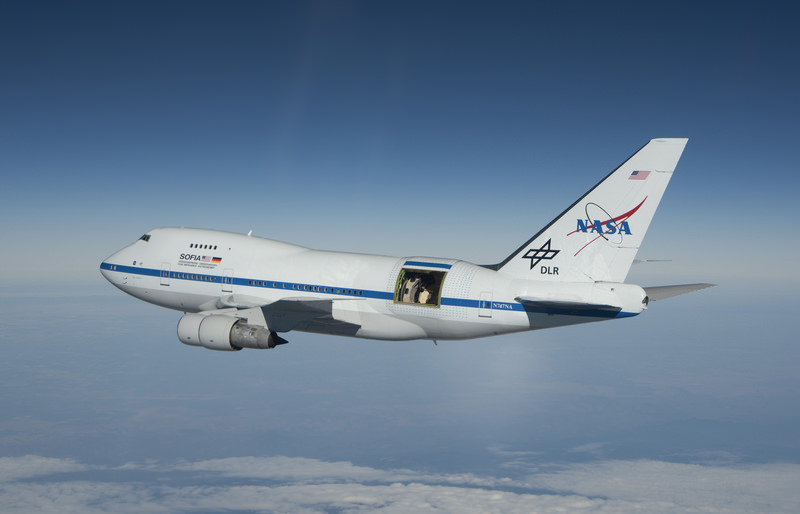 SOFIA in flight, with its telescope exposed. Image: NASA/Jim Ross

Naturally, there are a number of unanswered questions that scientists still need to contend with. For starters, there’s the question of whether or not water deposits on the sunlit portions of the Moon are accessible. There’s also the ongoing mystery about the origins of lunar water (whether it was produced indigenously or deposited), how it’s able to accumulate and persist in sunlit regions, and how its transported across the Moon.

In the near future, NASA hopes to conduct follow-up observations with SOFIA to gather more data and (hopefully) answer these questions. In particular, they will be looking for additional sources of water in sunlit locations and during different lunar phases. This data will also inform future missions like NASA’s Volatiles Investigating Polar Exploration Rover (VIPER), and help create the first water source maps for human exploration.

An Excessive Simulation of the Universe’s First Stars

The Coming Power Shocks below a Biden Administration

Youngsters and the Insect Apocalypse

One of many phrases of use for Starlink is that you simply "acknowledge Mars as a free planet".