When stars reach the end of their lifespan, they suffer a gravitational collapse at their cores. The type of explosion that results is one of the most impressive astronomical events imaginable and can (in rare cases) even be seen with the naked eye. The last time it did so was in 1604, when a Type Ia supernova occurred more than 20,000 light years away – commonly known as Kepler's Supernova (also known as SN1604).

Given the enormous amount of radiation they release, it is believed that past supernovae may have played a role in the evolution of our planet and terrestrial life. According to new research by geoscientist Robert Brakenridge of CU Boulder, these supernovae may have left their mark on the biology and geology of our planet. These results could have an impact as it is feared that Betelgeuse is on the verge of a supernova.

The study, entitled “Exposure of the Solar System to Supernova? Radiation ”was published this month in the International Journal of Astrobiology. For this study, Brakenridge examined tree ring records from 40,000 years ago. From this he was able to conclude that supernovae that occur relatively close to the earth could have triggered several disturbances in our climate.

If a supernova happened close enough to our solar system, it would expose Earth to enough gamma rays to wipe out our civilization and cause mass extinction. But even a distant supernova can take a toll on Earth by removing its protective ozone layer and causing other changes that disrupt our atmosphere and climate.

Brakenridge, a senior research fellow at the Institute for Arctic and Alpine Research (INSTAAR) at CU Boulder, was able to recognize the fingerprints of previous supernovae. As he described in a publication by CU Boulder Today:

“We see supernovae in other galaxies all the time. Through a telescope, a galaxy is a small misty point. Then suddenly a star appears and can be as bright as the rest of the galaxy … These are extreme events, and their possible effects seem to be consistent with the records of tree rings. There is generally a constant amount year after year. Trees take in carbon dioxide and some of that carbon will be radiocarbon. "

Brakenridge's research traced back to the presence of carbon-14 in trees. This isotope of carbon, also known as radiocarbon, occurs in tiny amounts in nature and is used to determine the age of objects that contain organic material (also known as radiocarbon dating). This isotope is regularly created by the interaction of cosmic rays with our atmosphere, but the rate at which trees absorb it is not always consistent. 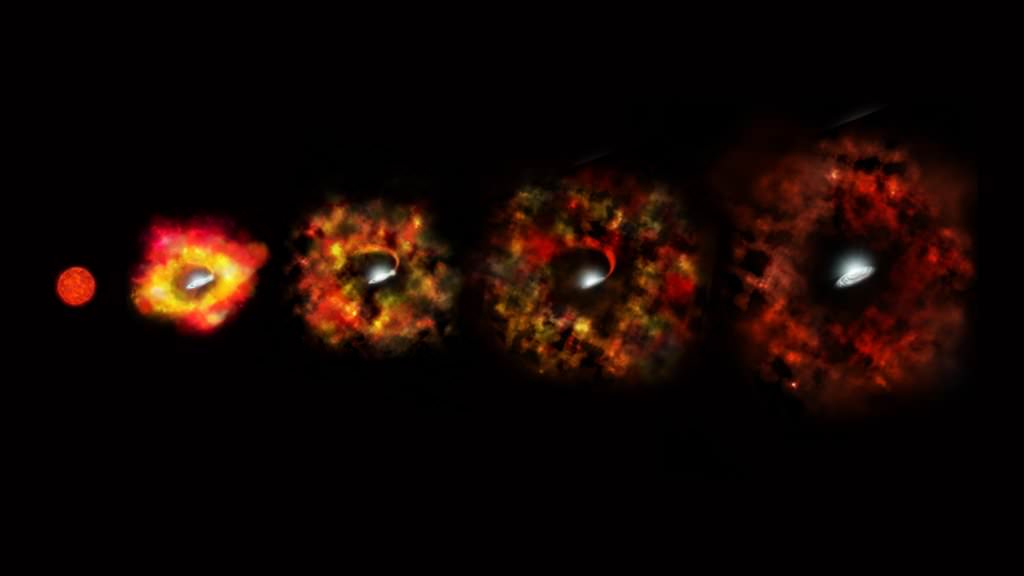 This illustration shows the final stages in the life of a supermassive star that does not explode as a supernova but implodes to form a black hole. Photo credit: NASA / ESA / P. Jeffries (STScI)

To test this hypothesis, Brakenridge examined tree ring records from the late Quaternary Period (approximately 40,000 years ago to today). He compared these records to eight supernovae that occurred not far from Earth during that time – which scientists can study today by examining the nebulae that were left behind. What he found was that all eight supernovae were associated with unexplained peaks in the radiocarbon record on Earth.

He thought four of them were particularly promising, such as the supernova that occurred about 13,000 years ago in the Vela constellation (about 815 light-years from Earth) and coincided with a sudden increase in radiocarbon levels on Earth by almost 3%. As Brakenridge explained:

"We see terrestrial events asking for an explanation. There are really only two options: a solar flare or a supernova. I think the supernova hypothesis was discarded too quickly. What keeps me going is when I look at the terrestrial ones Look at the record and say, "My God, the effects predicted and modeled seem to be there."

Of course, a margin of error must be taken into account, as scientists still struggle to accurately date past supernovae. This makes the timing of the Vela explosion uncertain for 1,500 years. It is also not clear what impact the resulting disruption could have on plants and animals on earth at this point in time.

The remains of a supernova in the Large Magellanic Cloud, a dwarf galaxy located near the Milky Way. (Photo credit: NASA / ESA / HEIC and The Hubble Heritage Team)

While these results are far from conclusive, they help illustrate how stellar events and the stability of life on Earth are closely related. This extends beyond the Milky Way and includes supernovae in other galaxies that create an enormous amount of gamma rays that can still reach Earth. While such events are not dangerous to life on earth alone, trees on earth could keep records of them as well.

This study could also have effects that are relatively close to where you live. In recent years, astronomers have noticed an unusual dimming behavior of Betelgeuse. This red giant star in the constellation Orion is 642.5 light-years from Earth – significantly closer than Vela. While opinions are divided as to what could be causing this behavior, some astronomers have suggested that it is on the verge of collapse.

One can only hope that Betelgeuse, due to its relative proximity to Earth, only sneezes gas clouds or has above-average sunspot activity. Otherwise, future generations could examine tree rings from that time and notice spikes in carbon-14! It might be a good idea to create a special telescope to monitor regularly.

The gender expertise of adolescent women working in grownup leisure in...